DIAGRAM AS AN ABSTRACT MACHINE

In the context of being a dynamic tool for creative process that is different from a sketch, a code or a schema; diagram functions as an abstract machine for creative process by providing intensive creativity and endless possibilities. Diagram, like a machine, provides abstractions that maintain the situation of being pregnant to newer formations at all times.

The term ‘abstract’ in modern picture refers to a definition of a line with variable direction which traces no contour, and delimits no form. In 1980’s, at the time when Deleuze had written ‘A Thousand Plateaus’ with Guattari, he asked directly the question; what should one call abstract in modern art? This issue is consequent to the long re-thinking of the idea of modern and abstract, which Deleuze had put forward in 1960’s; which involved the term ‘abstract machine’ that refers to ‘almost automatic’ series that one sees emerging in pop and in minimalism at that time in New York, around the same time of abstract expressionism, which carried out the questions if the painting was coming to an end. (Rajchman, 1998)

In accordance to the approach to diagram at issue and besides the notion of expressivity that is important to Deleuze’s point of view of ‘abstract’; he pointed out a situation in which ‘the canvas is never empty’, in other words the page is never blank (Rajchman, 1998). Due to the endless possibilities of creativity through an abstractive process, it can be implicated that diagram operates not only to visualize the invisible thoughts making them easier to understand functioning as a descriptive tool, but also to visualize the expressivity by functioning as an abstractive tool that provides sensation in the painting- establishing a bond between the painter and the observer.

According to Deleuze, diagram has been no longer an auditory or visual device; rather it functions as a map, a cartography that is coextensive with the whole social field as an abstract machine. This abstract machine is defined by its functioning in unformed matter, as series of processes that are neither mechanical nor organic. The diagram is both the ‘form’ and the ‘matter’; the visible and the articulable (Eisenman, 1999). The definition of diagram as an abstractive tool like in the metaphor of abstract machine, remarks the characteristics of diagram functioning as a medium in between the actual and the virtual, which supplies open ended situations for creativity. In the same context, diagram specifies the relations between formed/organized matter and unformalized/unfinalized functions; as a mediator that joins the two significant regimes: space (the visible) and the language (the invisible). In this manner diagram operates as a map/machine – a spatiotemporal abstraction (Vidler, 1999).

Regarding the fact that, the act of painting in diagrammatic manner involves an intensive form of the creative process, it should also be considered that the architectural design process is another form of an intensive creative process involving diagrams. Diagram acts as an agency which focuses the relationships between an authorial subject, an architectural object, and a receiving subject: it is the strata that exist between them (Eisenman, 1999). Just like it has been strongly underlined previously that diagram is a mediator between the actual and the virtual- visualizing expressivity and providing sensation; it functions similarly for architectural design process. Diagrammatic process has helped architects to visualize their invisible thoughts for design differently from sketches, schemas or various other tools of visual representations of information, functioning not only as a descriptive tool for the receiving subject, but also a generative tool for creative process involving authorial subject.

In order to better comprehend the issue of what is the place of diagram as an abstractive tool- in the same manner involved in modern painting- in architectural design process, it would be appropriate to have a look at the architectural design processes of the early works of Zaha Hadid. If the drawings Hadid had come up with in the early phases of her design are examined, it can be seen that these drawings are in between virtual and actual. They are neither the exact provisions of future, nor purely abstract suggestions that have architectural connection with place. They are neither just sketches, nor organization schemes. These drawings carry information both on possible tectonic relationships of spatial units, suggestions of new possible lifestyles, and the juxtaposition with the new and the existing. They are diagrams of architectural design process, as they are the preparatory works and the expectants of newer formations, ready to transform into architectonics; in the same way with the preparatory works on canvas – which is the process of flow of data in artist’s mind as representations of the possible realities – that are ready to transform into figure (Celant, 2003).

Diagrams in the architectural design process are transformed into the concrete world, keeping their fluidity, intensity and identity- which are the agenda of Hadid’s design approach. Looking at a single diagram, multiple propositions of façade, juxtaposed with the images of the interior, even the rear façade instantly, moreover, various life style suggestions can be seen; in one single frame complexities as a representation of a possible reality can be observed and sensed). Diagrams – in this point of view- have much more potential than a single organizational scheme, a perspective drawing or a sketch. For example in aerial perspective and layering drawing for Reina Sofia Museum, both the possible spatial relation of volumes which forms the structure, and the relationship of the structure with the environment can be seen, in semi-exposed and exploded way, and in one single frame. 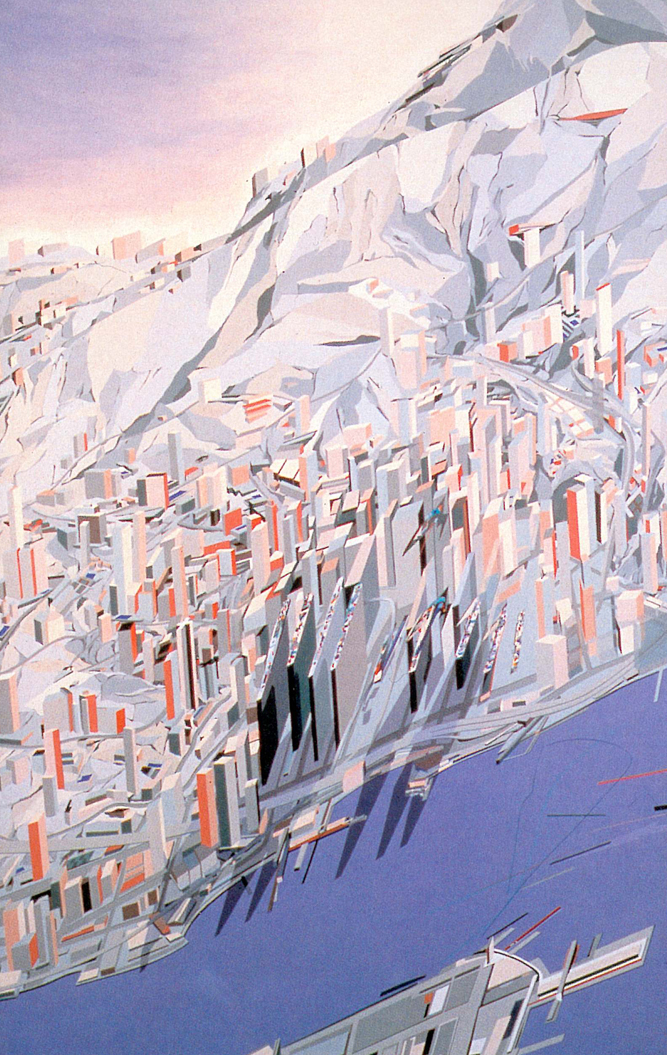 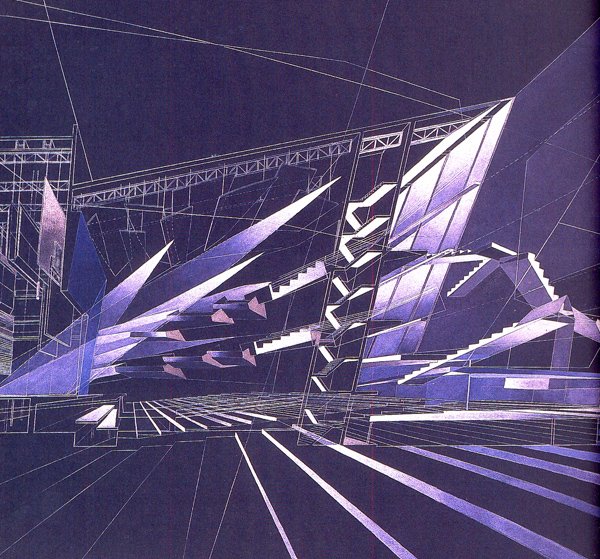 As it was scrutinized before, there is a transformation process of the abstract data to figure through diagrammatic process in picture. In the same way, the diagrammatic paintings of Zaha Hadid involve the ‘data’ that are ready to transform, which is in between abstract and figural, and that are expectants of newer formations (Mertins, 2003). Just like a raw material, they are processed, and transformed into concrete, keeping their fluidity, intensity and identity through diagrammatic creative process (Schumacher, 2002). That is why Zaha Hadid’s preparatory works are diagrammatic in the same way Deleuze have pointed out. As an outcome, the creator of such diagrams holds so many options of possibilities, ability to represent the thoughts in her mind in an expressive state that makes the observer or the potential user to complete the unrevealed parts of that dream. The Hadid’s diagram has distortions in the same way Bacon had in his paintings, the same continuity, the same fluidity and intensity of a diagram in canvas, making promises in the same way of Bacon’s diagram hidden on canvas (Giovannini, 2003). For Hadid’s paintings as abstract diagrams are tools to create new expectations such as, “what –possibly- it will be like in future” for the observer and stimulate various senses in the same nomadic way Deleuze had described, they are indeed outcomes of the act of expressivity and tools for sensation.

These characteristics of preparatory works of Hadid make them perfect diagrammatic tools. They form the abstract machines for the creative process sustaining the rich possibilities of formations, providing the ideal potentiality for an architectural design. Diagram in this sense becomes a dynamic transformative tool, just like in the situation of modern paintings- not a frozen state of design thinking as in a sketch or a schema. As there are various examples of diagrammatic processes in architectural design that can be taken in hand in the context of the notions in question; a significant one is of New Babylon Project, which was a series of utopian cities designed in 1959-74 by artist-architect Constant Nieuwenhuys. The design process of this utopia, which includes: collages of the new proposals with the existing, paintings of involving provisions of future and that are in between abstract and figural, that are filled with sensations , has a significant potential of being abstract machines and are to be named as ‘Diagrams of Utopia’ (Vidler, 1999).

As a technique of drawing, Nieuwenhuys encounters the nature of the project itself for what he is trying to represent is this very character. For this reason the drawings of New Babylon slide form being ‘mechanical’ to being ‘expressive’ (Wigley, 1999). The power of convincing (it may be thought that it is necessary for an utopian) comes from this representation effect that is intrinsic in these drawings, as they are filled with sensations. Nieuwenhuys’ representations provide the sense of the limitless possibilities inherent in the New Babylon. These representations involve drawings that ‘look like’ architectural plans, sections, models; they are neither exactly perspectives, nor sketches or massing models: They are rather ‘diagrams’. They are depictions, whether drawn or modeled, that look precise and at the same time imprecise, that look like tectonics but harbor no tectonics (Vidler, 1999).

Just like in Hadid’s work, they include the data that are ready to transform, which is in between abstract and figural. Diagrams that are involved in creative process of New Babylon project are in the role of abstract machines, which provide situations morphologically pregnant to newer formations, by providing the convincing effect, of the potentialities of what may happen in future. Nieuwenhuys’ work can be defined as diagrams of utopia; not only for they involve the representation effect that may be evaluated as data that are in-between the ‘actual’ and the ‘virtual’, but also for they are the outcome of an act of expressivity and tools providing sensations.